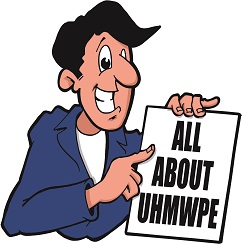 UHMWPE, or ultra-high-molecular-weight polyethylene, to give it its Sunday name, is a really really tough material with one of the highest impact strengths of any other engineering plastic. This plastic is often machined into pretty much anything, from small gears and pulleys to bearings to wear strips etc

Typically for the plastics world, it’s also known by many other names, such as: umpe, Umpy, PE1000, Ultra-high, 1000 grade PE and Perplas to name a few (the latter being an old trade name from back in the day, which we still get the odd reference) but all of them mean UHMWPE.

You’ll not be too surprised to learn It’s of the HDPE/Polyethylene family, but because it’s molecules are much more dense, it gets the title of ‘ultra-high’ and guess what, there’s also a few big advantages to this increased density business.

The Many Wonders of UHMWPE

As we mentioned earlier, it’s got one of those really low friction values which means it’s going to give us superb sliding properties, in actual fact it’s not a million miles away from that of PTFE (which is similar to that of ice) so you can imagine it’s one of the best materials you can use for wear and abrasion resistance, it’s almost like it’s self-lubricating itself and to give you some sort of an idea; In some forms it can be upto 15 times more resistant to abrasion than carbon steel. We’ve even heard of it being used as a wear strip for snow plows.

Again as we mentioned earlier, it’s also one tough cookie in the impact stakes, even at very low temperatures it’s not going to shatter or crack. It’s only when it gets down to -150 degrees centigrade does it start to lose some of those impact abilities. So it’ll even survive one of our typical northern British winters. (just)

Here’s a few other things which may come in handy, UHMWPE is: odorless, tasteless, nontoxic, and has extremely low water and moisture absorption. It is also very resistant UV radiation, and micro-organisms. It’s also highly resistant to most chemicals including many corrosive chemicals except for oxidizing acids. Not surprisingly it has a relatively low weight and is reasonably easy to weld.

Stay Away from the Heat and the Weight, However…

Since its melting point is around 130 to 136 degrees Centigrade, it is advisable not to use UHMWPE at temperatures exceeding 80 to 100 degrees for any length of time.

Also, when UHMWPE is placed under a tensile load it will deform gradually, depending on the severity of the load obviously, and continue to do so as long as the load stress is present. What this means is that if it’s not supported, it will bend even under its own weight. And if you overload a bearing severely as such, It’ll deform it permanently.

UHMWPE also ‘Creep’s’ under load (a subject we discussed a while back), creep for example is when a material is used as a gasket perhaps between 2 flanges and the bolts tightened to say 40ft lb, when materials creep it gradually deforms away under the load, the result is that those bolts that were at 40 ft lb will lose a chunk of that torque over time and the bolts will become loose. (Tufnol is always a good performer here)

I would also say that UHMWPE isn’t a particularly hard plastic as such, in comparison to nylon, PET or Acetal, it’s certainly softer, it’s described as having a ‘waxy’ feel to it and you could maybe mark it by digging your nail hard into it.

Because UHMWPE has this excellent abrasion resistance, it’s often used for applications that involve sand, gravel or aggregate processing. (Lining chutes) These environments are amazingly harsh on any lining material but UHMWPE is one of the few engineering plastics capable of withstanding such punishing abuse and would outlive a bare steel chute easily

UHMWPE is being used more and more in those automated industrial applications, such as the automotive, bottling and canning factories, usually as wear strips on huge production lines where not only does it not damage the cans or bottles etc, it almost seems to wear forever.

The big application though it seems is in the medical industry where for example, during the last fifty years UHMWPE has been the most commonly used material for total joint arthroplasty in orthopedic and spine implants.

UHMWPE can also be used for low friction pulleys because of its very low friction co-efficient and because it provides a bearing medium that is very free running and exceptionally long lasting, I once made some ‘V’ pulleys many many years ago for some exercise equipment out of this stuff, and to this day there still doesn’t seem to be any wear whatsoever. (can’t say the same about myself)

Also, because UHMWPE has this very low moisture absorption, you’ll also find it used in some of those high demand areas of marine, water treatment and sewer applications.

Sometimes though we’ve even heard of UHMWPE being used in some form of cryogenic components application due to its low operating temperature abilities.

Yes, But How is it to Work With?

When machining UHMWPE, high speed steel tooling is recommended with lots of back rake, side rake and clearances, and a generous nose radius. It is advised to be careful when turning UHMWPE as it typically tends to produce that continuous stream of swarf which always tend to wrap around the tooling.

Add in the “slipperiness” factor of UHMWPE the fact that it does not absorb readily, (it’s surface tension is very low). These characteristics make bonding to either itself or other materials very difficult. Ever since it was first development back in the 1950s, it has been considered a bit of an 'un-bondable' material.

Typically, it has required the hot air welding equipment process to attach sheets or rods together, or to other plastics. However, recent bonding technology developments, have produced products that can overcome some of the plastic’s surface property tendency to repel adhesives, but we wouldn’t say it’s particularly over successful still yet. We’d always say to ‘physically’ fix this type of plastic.

It’s available in the usual black and white which is the most common colour for all engineering plastics, but you may also have seen it in a nice bright or vivid green to add a bit of colour to your world.

How To Machine Polyurethane September 13, 2018

All about Delrin as an Engineering Plastic October 14, 2019