The Easter weekend was the first outing for the Isaacs & Tramm / Direct Plastics Pro Modified racing team.  We participate in the MSA British Drag Racing Championships and not only was this round one of this years 6 round championship but the first for our new team.  The team is made up of race car builder Chris Isaacs of Chris Isaacs Race Cars and four-time drag racing champion Spencer Tramm.  If you have been subscribed to the Direct Plastics newsletters for a while now you may have seen us a year ago feature how we fitted the Lexan Marguard windows to our car.

In this first instalment I will be mainly introducing you to what Drag Racing is and the procedures we go through in order to make a run down the famed Santa Pod quartermile.  We set off from the Wickford team base on Wednesday afternoon; I arrived at 3pm with the trailer only to be told that the car was finally completed no more than 15 minutes before I arrived!  We quickly loaded up and headed off to the track arriving early evening, set up what would be out home for the next 5 days.

Early next morning we while the team were checking over the car our good friends at Przym Paintworks were fitting all of our sponsor decals, that done it was time to fire up the engine and make sure all was ready for its maiden voyage.  Today (Thursday) was a test day; the event proper didn’t start until the Friday.  As with any new car the authorities don’t just let you strap yourself into a car capable of well over 200mph without proving that your are capable of doing so, this means a series of runs down the track starting with just a burnout (more on that later) and a then launch the car from the startline and drive until the 60ft marker which takes just over 1 second.  Once that has been signed off you have to then drive to the 1/8th mile mark and then two full passes, one of which must be over 180mph and two of times less than 7.4 seconds, until you have passed each one you cannot move onto the next.

So, what does a run entail?  Well, firstly when it’s time we tow to the startline, Chris is driving this weekend so he makes sure he has all of his safety gear with him,

we have a 5 layer fireproof suit and race boots, overboots, nomex underwear, crash helmet and Hans device all to make sure Chris is protected should the worst happen.  When it’s out turn we start the car and drive onto the track and stop the car in the water box, quite simply it’s a concrete pad covered in water to allow the wheels to spin and heat up the tires, once spinning Chris lets off the front brakes and the car smokes the tires over the startline leaving hot fresh rubber on the racing surface

Once back, we make the final adjustments such as removing the pins from the parachutes and fire bottles and we then move the car forwards into the staging beams making sure the car is straight

Once in the staging beams the starter flicks the switch and the lights activate, starting the run

7.17 seconds and a quarter of a mile later and the scoreboards flash the time and speed for our run 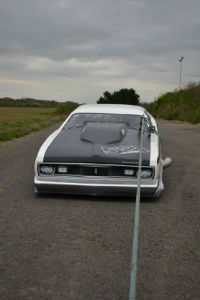 we then return to the pits where the parachutes must be repacked, engine checked and serviced ready to go again all within 90 minutes 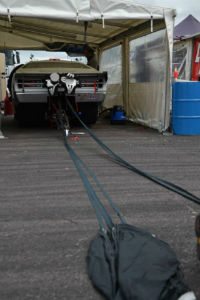 Unfortunately on this occasion our race day was a weather washout, however we were happy with the progress we made in round one we are all set for the 2nd round of the championships which also coincides with the first round of the European series where we will have to contend with not only the best cars in the UK but the whole of Europe.