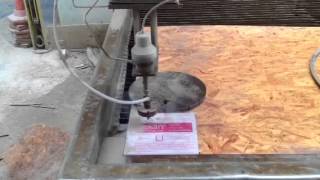 So how could a simple jet of water mixed with what looks like sand be able to cut hard Engineering Plastics? Well if you ramp the pressure right up and feed it with magic sand, the proverbial hot knife through butter effect springs to mind, we joined Control Waterjet to find out all about this fascinating technique.

Basic ingredient no1:
When we mentioned earlier about ramping the pressure right up, how’s about “fifty five thousand PSI?” yep, you read right, this insane pressure is fired through a nozzle creating a powerful jet of around 1.2mm in diameter and will take your finger off in the blink of an eye. They tell us that these nozzles manage to last a whole week if they’re lucky, before they are completely worn out and fit for the scrap bin.

Basic Ingredient no2:
The “magic sand” we also mentioned earlier is actually not sand at all but something called crushed Garnet, or if you want to go further, its a form of crushed gem stones. If like us, you think those particular words “Gem stones” have an expensive ring to them, you’d be right. This Garnet is pretty pricey stuff and although it happily collects at the bottom of the tank after its been used, there’s no recycling for this costly ingredient, so its a one shot deal.

Intricate shapes:
These machines are not surprisingly programmed by computer and are large precision pieces of kit. They cut to a tolerance of around +/- 0.25mm which equates to around 10 thou in old money. There is a slight taper they say on the edges of around 0.3mm as the jet comes to a point, so the bottom of the cut part is very slightly bigger than the top. The edge finish is pretty good though with only a very slight roughness.

Its pretty quick:
Although intricate patterns need to be run at a slower speed, these machines can cut at over 1mtr per minute when the shape is less complicated. They can even cut any holes needed so no need to drill later. Our patterned 8mm Lexan shape took less than ten minutes from start to finish

The finished article
Once the process is complete and item is finished, all that is left to do is wash the garnet off with clean water, dry it with either compressed air (to avoid scratching) or just a clean cloth for less delicate materials and hey presto your precision machined item is good to go.

Investment:
Its a serious investment that Control WaterJet undertake we’re informed, these machines can cost between £350k to £400k and even as much as £600k which is enough to make your eyes water, never mind constantly feeding them with crushed gem stones. Another expensive downside is the maintenance factor, they manage a nervous laugh as they describe each machine as “constantly trying to kill itself” with each of these machines constantly wearing itself away from the inside out due to the abrasive nature of the Garnet.

Watch out for Tufnol;
Because Tufnol is a laminate, its just a little bit trickier to cut with this method as the water being under such insane pressure tends to want to track along between the laminations; Control Waterjet has come up with their own solution to get round this though with pretty good results.

Advantages of Water Jet Cutting:
There are lots of advantages of waterjet cutting now that the health & safety issues of the harmful fumes given off by laser cutting have made it very difficult for the laser companies to actually machine most plastics these days. Waterjet cutting process allows for “nesting” of items on a sheet which means it can prove very cost effective with very little waste and there is also the bonus of “no heat” produced during the machining so the plastics are not affected or changed. Clear plastics we reckon though may require a bit extra care that’s all, due to the abrasiveness of the garnet residue and the fact that the protective film tends to remove itself.

These machines will also accurately cut 150mm thick material with similar accuracy as it would for say 15mm thick.