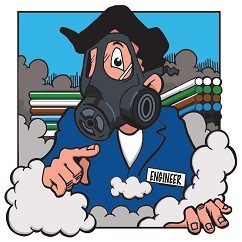 The Story Begins
On February 20, 2003, at The Station, a glam metal and rock and roll-themed nightclub, a fire broke out. The fire started just seconds into the band's opening song when pyrotechnics set off by the tour manager ignited flammable sound insulation foam in the walls and ceilings surrounding the stage. A fast-moving fire engulfed the club in 5½ minutes.

Industrial Plastics and High Heat
Working with and fabricating industrial plastics are not normally viewed as hazardous activities. Unless you take into consideration the possibility of some particularly nasty cuts, most plastic work is relatively tame.

Unless there’s smoke.
Under normal conditions there is little cause for concern when working with any type of polymer. However, when certain plastics are either superheated, or even ignited somehow, they emit damaging and even lethal by-products.

Smoke, Vapor and Fumes
While it may be obvious to some, it is instructive to clarify exactly what the differences are between smoke, vapor and fumes.

Smoke is simply defined as a collection of airborne solid and liquid particulates and gases. In other words, vapors and fumes. This mixture is typically emitted when a material combusts and is mixed with a quantity of air that is mixed into the material.

Vapors and fumes themselves are different things.  Vapors are the gas form of liquids; a fume, on the other hand, is very small airborne particles that have cooled from a very hot vapor or aerosolized solid (such as PVC). The difference between a vapor and a fume is important when designing ventilation systems or selecting respirators.

The point here is that if you are seeing and breathing smoke from a plastic component that you’re laser cutting or has somehow become superheated, you are breathing both vapor and fumes. And everything that they are composed of.

Another example is exposure to fumes given off during the hot gas welding of plastics such as PVC, nylon, PMMA, polycarbonate and polypropylene. Normally this is not likely to give cause for concern. However, there may be a health risk if the welding occurs in confined spaces in which the welder's head is close to the welding operation, and where ventilation is restricted.

On the other hand, exposure to hazardous fumes during hot gas welding of fluoropolymers such as PVDF, ECTFE, PFA and FEP, can cause influenza-like symptoms known as "polymer fume fever. These materials should not be welded above their recommended weld temperature and good local exhaust ventilation should be used. And laser cutting of fluoropolymers should be done with great caution.

A Rogue’s Gallery of Toxins
PVC has gotten a particularly bad reputation as a “toxic” product. While it is not the only polymer to pose a hazard when burning, it is definitely one of the most toxic.

The heat stability of raw PVC is very poor. PVC starts to decompose when the temperature reaches 140 °C, with melting temperature starting around 160 °C. However, the ignition temperature of PVC is as high as 455°C so it is a material with less risk for combustion since it is not ignited easily.

So what, exactly, is released when plastics such as PVC are superheated or ignited?

It Pays To Be Safe
During our working week we get used to the materials we’re working with. But the fact is that some materials have certain side effects once they start smoking. Combustion byproducts like HCN require very small amounts of PVC in a tightly enclosed environment to generate a lethal whiff.

In the U.S. the 2003 Station Nightclub fire in Providence, Rhode Island, ultimately killed 100 people. Almost all of them died from toxic smoke inhalation. The fire generated enough carbon monoxide and hydrogen cyanide (HCN) to turn the place into a gas chamber in less than two minutes.