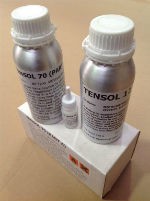 Okay, this is one of the subjects we get asked more often and being honest we’ve shied away from it for quite a few reasons, firstly its always seemed to be a form of witchcraft, also, some engineering plastics are pretty tricky to bond, (adhesives usually come in plastic containers for obvious reasons) then there’s the huge range of substrates as they’re called that the plastic could potentially need to be bonded to, let alone all the conditions the adhesive may need to endure. For this reason we’d always suggest contacting an adhesive specialist but we thought we’d dip our toe just a bit and learn some of the basics at least. We enlisted the help of a specialist adhesive company called Permabond Engineering Adhesives this month who gave us some great help and advice.

What we’re trying to do here.
It doesn’t take long to get bamboozled with the world of adhesives, they all have their “techy” names with a string of numbers and half the alphabet chucked in for good measure. You just know that getting just one digit slightly  in the wrong order and spit would do a better job. The following isn’t going to make us all experts but we wanted to lift the veil just a bit and share what we found.

Just how do they work?
There are two main methods of how adhesives work, mechanical bonding (most common) and chemical bonding (next most common) there are a few other types but they are even more specialist, rare and probably wouldn’t work for us anyway so we thought we’d save us all the effort there.

Why are some plastics difficult?
Its called “low surface energy”, the best way to describe it is; if you waxed your car on Sunday morning, an hour later you typically get to fume at it through your living room window as you watch all those beads of rain running off, that waxed/bead effect is the effect that some plastics have with adhesives.

What we would say though is that there are adhesive technologies these days that can get around these issues; PTFE for example can be chemically etched and bonded pretty successfully.

Mechanical Bonding
The basics of mechanical bonding are that the adhesive works its way into the minute pores of the surface of the material and acts like millions of tiny screws if you like, locking into both surfaces to hold them together, you can see why roughening the surfaces is often recommended.

Chemical Bonding
The basics of chemical bonding are a bit more complex as the adhesive interacts on a molecular level. Its where the adhesive actually interacts and forms a merged chemical compound, basically the two substrates and the adhesive all merge together at the joint.

Adhesives that we’ve all heard of
Below are some of the glue’s that have all pretty much become household names to us over the years and what they are and what they do.

Contact adhesive
Bostik as my dad sometimes called it is used to bond large areas of materials that have a low porosity. For porous materials, it usually needs a primer (or another coat) you apply a layer to each surface, wait a given time till the adhesive is dry to the touch and place the two materials together, it bonds on ‘contact’ so no 2nd chances. The reason why its good for large areas is that this adhesive has already cured, other adhesives would never cure, this adhesive wouldn’t be described as the strongest in the world though.

Superglue
Here’s a secret, the technical name for these adhesives are Cyanoacrylates, these adhesives (and there’s lots of grades) are pretty trick for plastics and bonding them to most things really. They bond porous and non-porous, rigid and flexible, have high temp range and their bond strength can be sometimes greater than your actual material. Something to think about though is that it has a tendency to cure in literally seconds and they’ll probably need a surface primer for all plastics with this low surface energy (just checking if you were paying attention earlier)

Epoxy Resin
You’ll probably need the two-part version for plastics as “single part” needs baking in an oven at temperatures higher than most plastics can live with. Two-part epoxy resins come in those syringe type applicators and you get those mixer nozzles and you’re all set. These are pretty good for harsh environments; not bad for plastics, the cure times are often minutes but can be hours though with certain grades.

No Nails
These are a contact adhesive that have enough “tack” to form an instant grab, I suspect these adhesives are more; DIY/ building orientated world but it may work with PVC (most adhesives do)

Something to watch out for
Some plastics can have an issue with certain aggressive adhesives and may stress crack, this usually happens at the edges of the material, we’ve definitely seen it on Acrylics and Polycarbonate.

Selecting an adhesive
There are literally thousands of combinations and the answer seems to be in contacting an adhesive specialist like Permabond, (we stock adhesives of Acrylic) some of the info you may be asked may include;